Microsoft and «1С» company agreed to lease «1С.Enterprise 8» through Windows Azure. Such scheme, according to the «1С» partners, will find demand from the customers, but will not be suitable for those who do not want or cannot give his data to the foreign data centers.

Leasing of «1С» and infrastructure

«1С» company and Microsoft agreed to lunch the pilot projects for «1С.Enterprise 8» publication on the platform Windows Azure. The browser access to the Russian software will be sold in the package with leasing of infrastructure (IaaS) and technical support.

«The tasks of solution customization, as now, will be resolved by the «1С» partners», - said in the Russian office of Microsoft. - Now with the customized solution from the «1С» partner the customers can get in a single package the cloud infrastructure of Microsoft and pay for is according to the consumption». «1С» notes that the partners will be able for the first time to sell an access to «1С:Enterprise 8» in the package with lease of infrastructure from Azure.

The prices at the stage of agreement about the pilot projects are not specified, as well as the companies are not still ready to name the exact date of service appearance for the Russian customers. The licensing and pricing model is under development, said the agreement parties for CNews. Usually «1С» is selling the partners the rental licenses plus gets quarterly 2,5% of their revenues.

The founder and director of «1С» Boris Nuraliev explains the partnership with Microsoft by the desire to develop the cloud line of business. The President of the Russian agency of Microsoft Nikolai Pryanishnikov says that software will be available from the data centers of American company and promises for customers to upgrade their existing software. 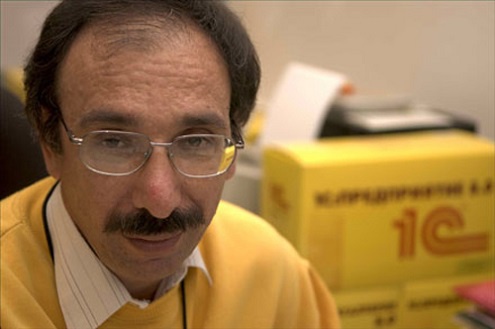 What do the «1С» partners think

Head of the Department of Information Technologies of «First BIT» company (formerly «1С: Accounting and Trade») Maxim Torbin told CNews that his company has already launched several pilot projects on the Azure platform and after testing will proceed to the direct sales of solutions.

«Customer wants to get an inexpensive, finished solution which will not require considerable investment and allow to quickly move to its application. We are going to offer our clients a cloud solution «from box» the basis of which is Windows Azure».

Director of Business Development ActiveCloud (is a part of Softline group, offers the leasing of «1С» from its DPC) Andrian Bushin describes the appearance of «1С:Enterprise 8» in Azure as a serious step towards and an assistance for «1С» franchisee.

«This will provide them with finished technological SaaS-solution and platform with infrastructure, server capacities and deployed software. As a result, the will be able to offer for their clients the «1С» products for leasing and complement them with their own maintenance service».

According to Bushin, this will allow the franchisee to focus on providing the specialized consulting services and solution support, instead of investing hardware, configuring and supporting the entire non-core for them infrastructure.

Own SaaS-services of ActiveCloud will have creak competitive advantages and their niche, in spite of the appearance of Microsoft and «1С» proposition, thinks Bushin.

«Not all customers will be ready to user the proposed service bringing their data abroad, not all of them are allowed to make such a move by the legal restrictions. And it was such an opportunity that will provide a joint project of two manufacturers for their franchisees. For those partners and clients for whom this option will be not suitable our solution «Hosting and leasing of 1С» will be always a serious alternative: they will be able to select the country of service placement and usage from a single service-provider, as well as migration of their data from Russian Federation, countries of Europe or CIS».

Where else can you buy the cloud «1С»?

First time the talk turned to the «1С» software leasing in January 2009 г., when the company began to test SaaS-scheme for «1С:Enterprise 8». An opportunity to lease the licenses instead of their purchase was placed in the commercial operation in May 2010. AS the time, the work with «1С:Enterprise 8» using the browser was already implemented and the licensing remained the only obstacle for leasing.

A year later, in May 2011 Boris Nuraliev spoke about the modest results of this direction at the start. In prices for the end-users the revenue in 2010 amounted 18,45 million rubles or about one third percent of the total. 1C received itself from the revenues of partners through the assessments mentioned above only 1,8 million rubles. However, in addition, vendor receives single payments for the licenses, this amount is not disclosed.

The movement of «1С» in the clouds did not stop with the introduction of leasing. In September 2011 at the economic forum in Sochi, the company signed an agreement with «Rostelekom» to sell software through the «national cloud platform» О7. The «1С» products appeared on the site in May 2012. At the same time vendor launched its own site for SaaS sales 1cfresh.ru.

Once again vendor disclosed its statistics in June 2013. At that time the leaders of «1С» declared multiple increase of the total revenues of partners compared with 18,45 million in 2010. In 2011 the similar figure was 43,7 million rubles and in 2012 – 85,7 million rubles. The total number of SaaS-partners by the second quarter in 2013 reached 210 organizations.

The statistics of software sales using Azure and the results of main partners in Russia Microsoft does not disclose. The second side of agreement is mot open. «In September 2013 236 partners participated in the project «1С:Rental Software», their total revenues for 9 months in 2013 increased by 64% compared with the similar period in 2012», - said «1С».