We have implemented a completely new mechanism to adopt solutions for specific customer – mechanism of extensions.

Why extensions are good?

The extensions provide new strategy to change standard configurations. The use of this new strategy will significantly facilitate maintenance of standard solutions which you want to adopt for the needs of specific deployment, specific customer.

How this process looks like now? There is a standard configuration. It is completely maintained by vendor. It means that you cannot change it. A vendor releases periodically the new (advanced) versions of this configuration. In this situation the update of old configuration version to a new version is performed completely automatically. It is convenient and does not require from the customer any special skills and knowledge. 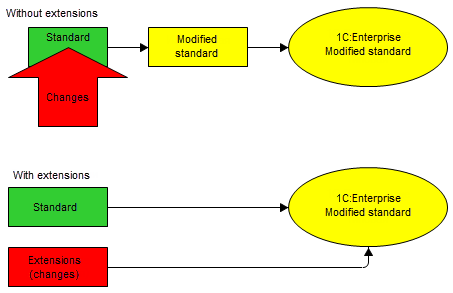 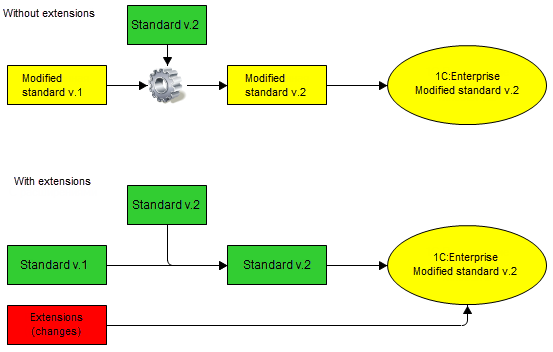 When extensions should be used?

The mechanism of extensions is tempting for its versatility. Therefore, it is important to understand which problems it is designed to solve.

Firstly, the extensions are indispensable when the application solution operates in the mode of data separation. For example, in the service model. One of the consumers wants to have a couple of additional reports. While the other consumers want to work with unchanged standard configuration.

Then it is for this consumer, you can develop an extension in which you can implement all his wishes. The consumer will connect this extension and will work with the changed configuration. While no changes will be made for other consumers. Because all the extensions are connected and launched in the section of the current values of the delimiters.

If to go deeper in the history of the emergence of extensions, surely, we have seen before, we see right now that the configurations become for difficult. We see that an additional support is required on the different development levels: library, module, industry, etc. We had been analyzed all these tasks and came to the conclusion that the priority at this time is an adoption of configurations to the customer wishes during the deployments.

It is for this task, we have created a mechanism of extensions. Of course, you can see in it the different features from other listed development directions. But they are not the main purpose and should not confuse you.

What can be changed using the extensions right now?

It is done not a lot as yet of what we are planning to do. Of course, a mechanism will be developed. But everything what has been done may be useful in many cases of deployments. Now:

In the future, we are planning to increase gradually the functionality of extensions and will be glad to get your opinion on what functionality is the most needed with light modifications.

How is the extension organized? 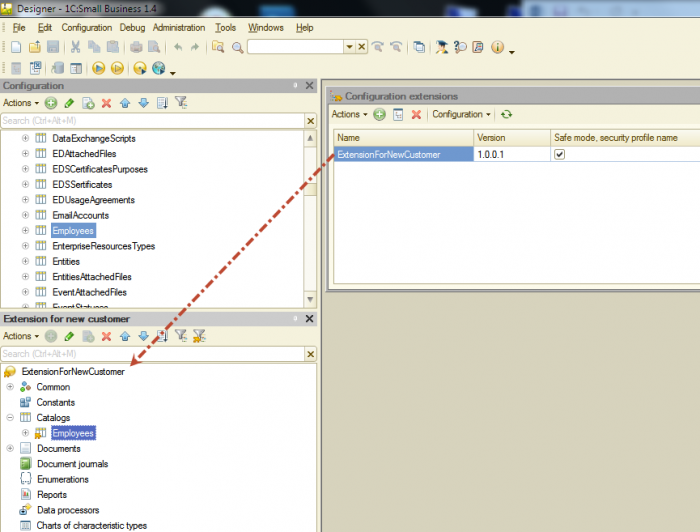 An important feature of extension is a presence of imported objects. You can import any object of standard configuration using a context menu command: 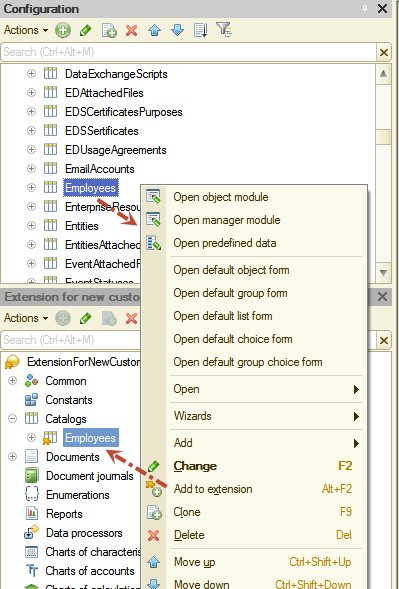 The imported objects are not always needed. It is better to explain everything on the «household» example if to draw an analogy with a dinner at the restaurant.

The first situation when you need the imported objects.

You used to have a dinner at the same restaurant. You always order a steak and tea. For example, because they are very good at this restaurant. Or for any other reason. It does not matter. It is only important what you a going to eat only them and nothing more.

Then the restaurant is a standard information base. You are an extension. The restaurant menu is a extensible standard configuration. Steak and tea are the imported objects. You have imported them (remembered that they are in the menu).

How is an extension connected to the configuration and work? You go to a restaurant and ask for the menu. You see in the menu that there are steak and tea. That is, you set a correspondence between the imported objects and the standard configuration objects. Of course, you set a correspondence by the names :). The waiter brings for you steak and tea and you eat them. That is, an extension is connected and works.

One more week later, you go to the restaurant and see that steak and tea have disappeared from the menu. You stand up and go away (a message on extension connection error). Because you wanted to eat just them. And you know nothing about other dishes (objects). The developer did not teach you how to eat properly snails and lobsters.

Another situation when you can do without the imported objects.

You go t he restaurant, but you are not interested in the presence of specific dishes. Because you are not going to eat them in any case. You just want to take a picture of them. And you can take a picture of any dish. Then you simply connect to the configuration and say: bring me all the snacks you nave in the menu (receive a collection of documents from metadata). I will re-conduct them (take a picture).

If to describe all of this with a barren style of developers, it will turn out that the objects should be imported: 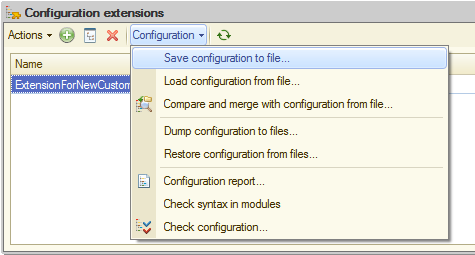 You can give this file to the customer. The customer will load it himself in his information base in the 1С:Enterprise mode using the standard function Configuration extension manager. 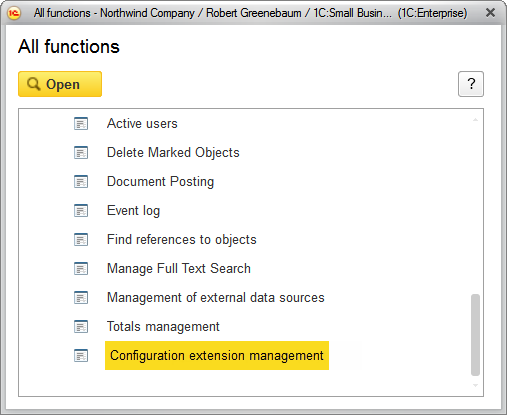 You can work with extensions from the script, so you can create in the application solution your own data processor which will load the extensions. In order that the extensions were not «amused» by one and all, we have added a new right - Configuration extension administration. 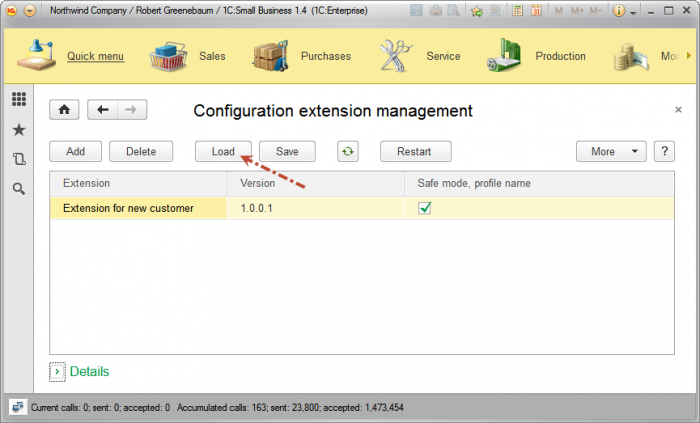 In order that extension began to «work», a session must be restarted. At the start of the session, immediately before calling an event SessionParametersSetting, all the extensions will be connected which are stored in the information base and correspond to the current values of this session delimiters.

When the extension is connected, as we already said, the presence of imported objects in the standard configuration is controlled. Comparison of the objects is performed by the names.

An addition, more thin control is available. You can control not only the fact of object presence, but also the state of their individual properties. That is, if you remember the restaurant and steak, it can be important for you not only the presence of somehow cooked steak, but just the fact that it is cooked here «rare».

Returning to extension, it does not control by default the properties of imported objects. But if necessary, you can make some properties controllable. For example, it is important for your algorithm that there was not only a catalog Employee, but also the fact that its code has a type String. 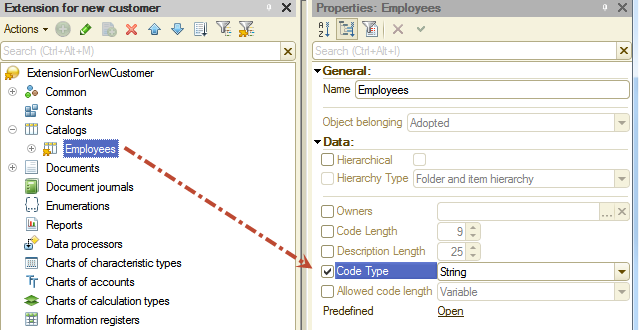 Then if the vendor will change in the standard configuration a type of this catalog to the Number, you extension will determine that during connection and will produce an error.

An interesting point is associated with renaming of standard configuration objects. For example, you came to the restaurant, and in the menu it is written Steak instead of Beesteak. That is, while connecting to the configuration, the extension does not find in it the catalog Employee, because the vendor has renamed it to the Users.

Now this situation is not a problem for you. And you do not need «sift through» the entire extension code in order to write Users instead of Employee. The mechanism of module code modification when renaming configuration objects and the refactor mechanism are working. Therefore, it is enough for you to change only the name of imported object to the Users and all the rest changes in the extension the platform will make itself. Of with your minimal help.

You can see that in more details in the example of manageable forms. You can import the form from the standard configuration and edit it in the extension without limitations. For the visual part of the form and for its module two different combination strategies are used.

A visual part of the form is set in the extension at the moment of its import. And in the 1С:Enterprise mode for each form item the changes are analyzed relative to this state in the standard configuration and in the extension.

In general, with regard to the joint work of configuration and extension in the 1С:Enterprise mode, they exist in the common namespace. This applies to not only the individual modules, but the metadata trees too. Therefore, it is impossible in the 1С:Enterprise mode to determine whether this object is a «native» for the standard configuration or it has appeared from the extension.

In regard to the other objects that you can use in the extension, everything looks much easier for them.

You can expand the roles only by adding to them the objects created in the extension. You also cannot remove something from the existing role. The same applies to the command interface.

We said at the beginning that the extension is similar to the usual configuration. Therefore, in conclusion we want to say several word about how strong the extensions are integrated with the other platform mechanisms.

You can upload the extension in file (albeit with another extension *.cfe) and load from file. The extensions can be uploaded / loaded in XML.

New parameters of command line have appeared to work with extensions, as well as new events in the event log.

The main script object to work with extensions is ConfigurationExtensionsManager.