Let’s talk about automation. Automation of enterprises, or at least some departments or even some functions. The word by itself is something artificial. It is not seen the life behind it. Sounds nice, but can be interpreted in different ways.

Typically these questions are given little attention in the project. And in fact we get the system and the need for its permanent support.

Here is an example. In carrying out the project at a manufacturing enterprise I was obsessed with the idea to make the system «like in the supermarket». Took the product, brought to the barcode scanner, put the goods. Took the goods, to the scanner, put the goods. Took, brought, put. And so in a circle. The creativity of particular employee was suppressed as a kind using development of the workbenches (or simply interfaces). And since the system was designed for logistics and production shipping, the deep analysis was conducted for every operation performed by each employee. Not superficially, but namely in detail. From the moment the order has come in company and the time it was shipped.

And I tell you that a mega staff worked in logistics. All the necessary information was in their heads. Very experienced. They knew everything. Or rather knew what to do and in what order. And carried a huge amount of work for a relatively modest salary. Which therewith was delayed. There was no practically automation and the IT-services reputation in their eyes was the lowest of the low.

I felt humanly very sorry for them because I didn’t understand how is it possible to work persistently in a frantic rush and to come home at midnight. And looking at their current activities I tossed and turned in my sleep for a long time later. Really wanted to help them – they were so tortured.

And the system was created. Before the beginning of its implementation I insisted on a comparative experiment execution. They selected the most time-consuming cases. At first they did it in the same old way. Everything is expectable. Time consumptions are unreal. Then, the same, but in the new system. Divided one by another. Calculated the effectiveness, productivity. Converted in the hours, days, months. The data showed that with these results 80% of the staff can be cut. And the rest can be replaced by less skilled and less cost-based.

The system began to be used and organically fir in the current work. Do you think the people were cut? No, no one was cut. Free time allowed to do the works which there was no time to do before. Or which was done on weekends and overtime.

The people began to leave the work on time. Began to smile. The work turned from insufferable to not very of a hassle. Some major mega specs went to maternity leave. The woman on maternity leave came on their place bored at home. Gradually the life of company calmed down, the critical bugs of the system were fixed and it began to work without permanent support. With the lapse of time everyone who passed the implementation way either was promoted or left the company. They were replaced by others. Who did not know how bad it was on that section.

Relaxed? Do you think peace and quiet? No way.

The PROBLEMS started. Everything began with small things – the company directors decided to implement the new work schemes. This meant that it was necessary to form certain document, print the forms, link in the system the staff of different departments. This, in turn, requires upgrade of created system. Naturally, all upgrade testing is conducted at the expense of users.

And then I discovered that there are no errors. More precisely, nobody reports me about them. I began to worry, error absence is a true sign that the system is not working or the Martians came and secretly tweaked the system. I decide to check on-site. It was found that the new employees did not even notice the improvements. They were not confused by the new interface, new forms, new instructions. They continued to press the familiar buttons. They are sued to them and gave them the pet names. Frankly, I emphasize, believing that everything is as it should be. And even obvious errors did not cause them doubt. There was no even talk about any analysis of their actions. When they were asked why did not call, did not report, the answer was simple: ” It’s none of my doing, the program yield so”.

I introspected later for a long time on this and came to the conclusion that there is some automation threshold after which the person stops thinking and simply pushes the buttons. I have even derived the relationship between employee productivity and qualification. See the figure. And if, nevertheless, this threshold is passed, then it is necessary to shoot the works and exclude the person from the system, i.e. to develop bots which can also to remarkably push the buttons.

Some time I will tell you about this experience and what happened as a result of the replacement of staff with bot. 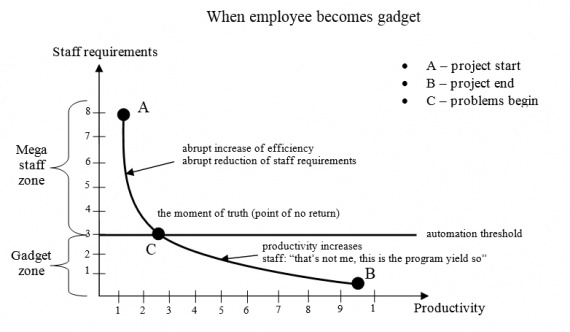