You know the form editor well from the previous lessons. Developers use the form editor to specify a set of controls (fields, buttons, tables, and so on), attributes (data), commands, and parameters used in a form. To make a form interactive, developers specify the relations between form controls and form data, and also customize the interface properties of the form controls.

So developers do not "draw" forms but describe them using a dedicated editor. The platform generates a form based on that description with the option to customize form behavior by adding 1C:Enterprise script algorithms to the form module.

The Elements tab in the upper left pane is used to edit the assortment and order of form controls and combine them into groups. You can change the appearance of the controls by assigning values to their interface properties.

Properties of parent items in the tree of form controls define the assortment of subordinate item properties and their property values. For example, when you add a button to a command bar, the Type property of the button is automatically set to Command bar button.

The form control positions are defined as follows: controls that are higher in the tree are closer to the top and left form borders (fig. 28.2). 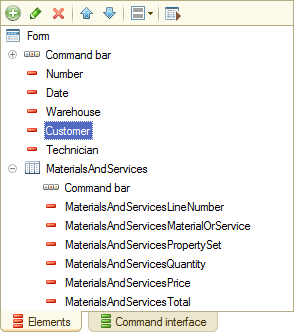 The Command interface tab in the upper left pane of the form editor window is used to specify the assortment and order of commands in the form navigation panel and command bar. For example, you can set visibility for commands that open related lists or generate objects (fig. 28.3). 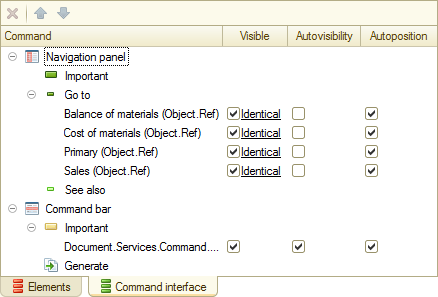 The Attributes tab in the upper right pane of the form editor window is used for specifying the assortment of form attributes and their properties. The main form attribute (the one with the Main attribute property set to True) is displayed at the top of the list in bold font. This attribute defines the form functionality (fig. 28.4). 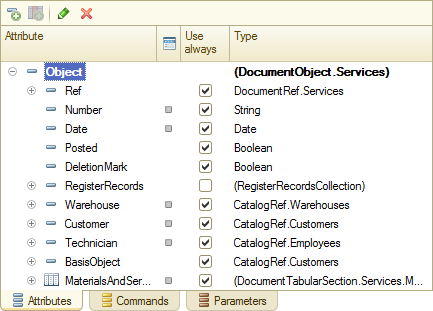 If you delete a form attribute (and confirm the deletion), form controls linked to the attribute are also deleted from both the controls tree and the preview pane.

The Commands tab in the upper right pane of the form window is used to define the assortment of commands available in the form. This includes developer-created commands (Form command tab), form-specific and form extension commands (Standard commands tab), and global commands that belong to the entire configuration (Global commands tab, fig. 28.5).

The Action property of a developer-created command links the command to a handler procedure (a 1C:Enterprise script algorithm described in a form module, see fig. 28.6).

If you delete a form command (and confirm the deletion), form controls linked to the command are also deleted both from the controls tree and the preview pane.

The Parameters tab in the upper right pane of the form window is used to define the assortment of form parameters. Parameters are used to fine tune form functionality when the form is opened in 1C:Enterprise mode.

The Module tab at the bottom of the form editor window opens the form module, which contains the form algorithms written in 1C:Enterprise script. This includes form command handlers, form control event handlers, and custom procedures and functions (fig. 28.6). 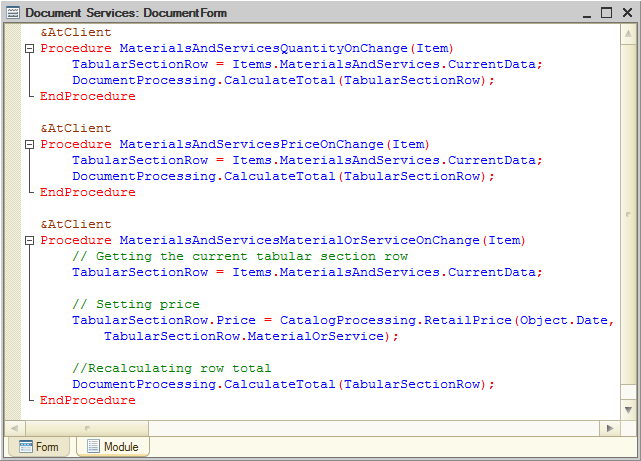