So, the configuration algorithms can be based on predefined items.

Now you can see the main difference between regular and predefined catalog items from the configuration point of view.

Regular items are not permanent. Users can create and delete them. Although the configuration can distinguish them from each other, you cannot use them in the algorithms because they can disappear at any time.

Predefined items are permanent. They are always available, regardless of user actions.

Therefore, the configuration algorithms can rely on predefined items. This is why each predefined item has a unique name, so that it can be referenced using 1C:Enterprise script.

Up to this point we have not dug deeply into the structure of the 1C:Enterprise system, but this is a good point for a few words on the subject.

Why not true? Because each infobase has a minimum of two configurations.

Why not exactly true? Because in practice a user always works with a single configuration. The other configuration is intended for developers or for those who modify the configuration (for example, infobase administrators). It is not visible to users.

But the base name is given from the developer perspective and makes great practical sense.

Besides, a repository can exist outside of an infobase. It stores a configuration that is intended for shared development.

A certain number of configuration files can exist outside of the infobase as well, including files belonging to a new distribution package (fig. 3.74). 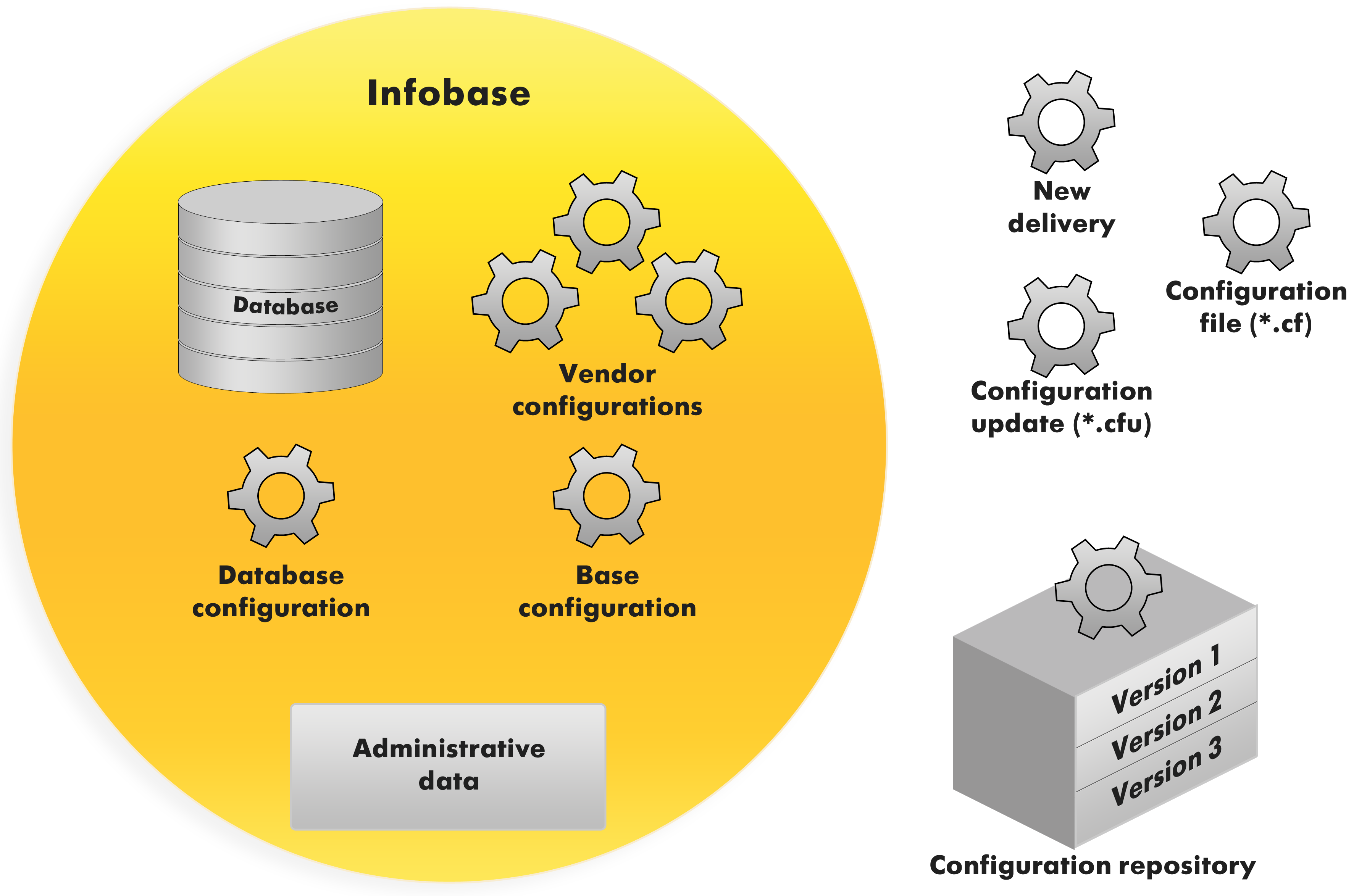 Now imagine that there is a way to perform comparisons and updates between all these configuration types. In this case, it is easy for things to get into a muddle, so the name base configuration is the best way to reflect the overall goal of these changes.

If such modifications do not affect the database structure (for example, database tables do not need to be modified, only module script is changed), a database configuration can be updated without interrupting user work. This process is referred to as dynamic update.

Users will only see the changes after they restart their application. The DataBaseConfigurationChangedDynamically() method of 1C:Enterprise script is intended for checking whether the applied solution restart is required.

So, the relationship between the two configurations can be depicted as follows (fig. 3.75).

Fig. 3.75. Relationship between base and database configurations

This is how the platform simplifies configuration development and automates frequently used actions.

When users add regular catalog items, they add them to the database structure based on the Catalog configuration object.

The platform adds predefined catalog items to that database structure according to their descriptions in the Catalog configuration object.