PROCEEDINGS: Any software product deployment is a team work. And to achieve a positive result, it is important what kind of relationship system will be in a team. What factors can prevent a precise formulation of project objectives? What kind of management system can be an insurmountable difficulty on the road of successful deployment?
These problems are focused on the speech. 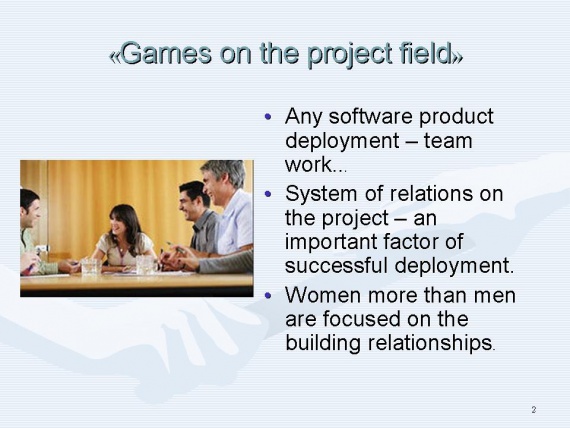 Any SP (software product ) deployment is a team work. And to achieve a positive result, it is important what kind of relationship system will be in a team. And both in the case of insourcing and outsourcing, it (relationship system) will be constructed in the course of the project.
The programmers, financiers, manufacturers and accountants are definitely talented in something people. But working with talented people, it is required to clearly understand that the one who is talented in one thing can be a complete ignoramus in other respects. In the intense crisis situations which are abundant in the project of «deployment», i.e. «intrusion in a resistant environment», an informal side of the work of managers of different levels — building relations, improvisation in communication, what is known as emotional and social intelligence. For these competencies there are no high school diplomas, they are acquired with the life and professional experience. And for the women managers they are often instinctively clearer and closer than for their many male colleagues. We, women, are used to maneuver, to seek and find a common language with different people and generations who make up our family. As a psychologist women and business analyst, I have got some observations when working in the SP deployment that I am ready to share now. 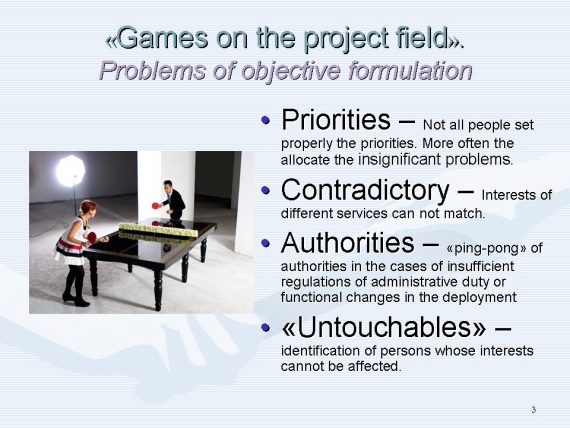 It is extremely important in the project to formulate the objectives. How are usually the objectives formulated? Anton Chekhov has an observation story from his medical practice. A hard working man attended his medical appointment with a complaint to the wound on the finger. Treating the wound, the doctor accidentally saw coagulated blood on the patient’s head. There could be much more serious wound. It turned out that the day before, in a drunken fight with a neighbor, a man received a wound both of the finger and head. But only a wound of the finger troubled him:
— I’m working with it, — explained the hard worker his arrangement of priorities.
So in the project: describing their demands, people often think of the little things. And a disaster for the project can be advancement of new demand which will negate the work done previously. Therefore, I try to return several times to the process of demand and task formulation by each user, especially the key ones. And most often, these requirements do not match one with another. It’s time to say: «In the previous interrogation you have shown …» and to study the methods of interrogation.
Despite the fact that most of enterprises has an organized structure (collateral subordination of subdivisions and positions), a conflict of the interests of different services begins to appear on deployment. Therefore, it is important to specify the «highest judge» who will be able to approve a compromise variant or in the form of an order to make the manager to take into account the team interests. The most common example of such contradictions — the interests of financial and economical services. Ideally, these problems are solved if both services are subordinate to the chief financial officer. In my practice there was a case, when the chief economist and chief accountant were locked by the chief financial officer in his office on the day of anniversary of the chief accountant. The reason was the absence of compromise solution for the important for the project question.
— Until you will not find a common position, greetings will not be! — explained financial officer his action. After a couple of hours the compromise solution was found.
This group of problems also includes the situations of the «ping-pong» of authorities. Even in the case of clear regulation of administrative duty (and this is rare) the project is always connected with the changes. The tasks that are most often voiced and implied in the new SP deployment:

Solving these tasks can significantly change the functionality of subdivisions. Therefore, it has to voice in the project the comparison of new SP with the score for the orchestra: everyone should get a «part for his instrument» and play it on behalf of a team. So, the accountant has to enter data required for another service.
As a consequence, when solving the problems of objective formulation, «demarches» may occur from the side of executors and managers of different level. Most often the first reaction emotions come to a desire to «go away with a head held high». To this reaction it is better to be prepared in advance and on the initial project stage to assign people whose interests can be affected only with extreme caution. This may be a unique technologist or mother-in-law of the owner’s friend. (EXAMPLE with the dining head). 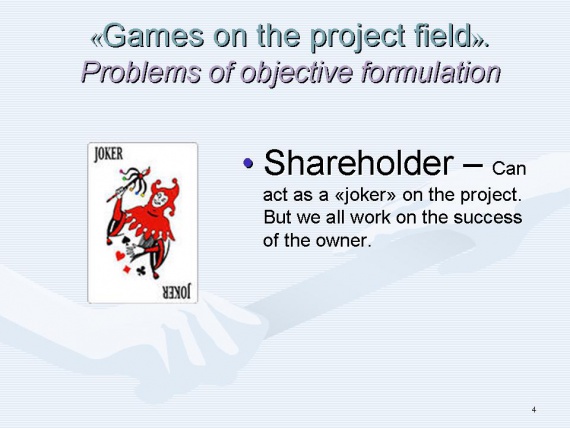 In the role of original «joker» the owner himself can act in the project, if his hands «reach for» the management levers. A shareholder may suddenly change his position, the game rules and its objectives even according to the previously agreed information. Well, the shareholders are the same people, therewith, they have more developed self-preservative instinct than the ordinary people. We all work for the owner success, no matter what objectives were voiced in the project. Through this prism all the client requests on the project should be assessed that will be formulated by the representatives of different services. 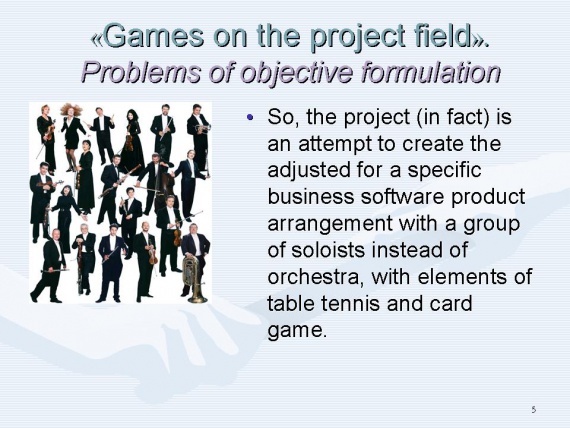 So, the project (in fact) is an attempt to create the adjusted for a specific business software product arrangement with a group of soloists instead of orchestra, with elements of table tennis and card game. 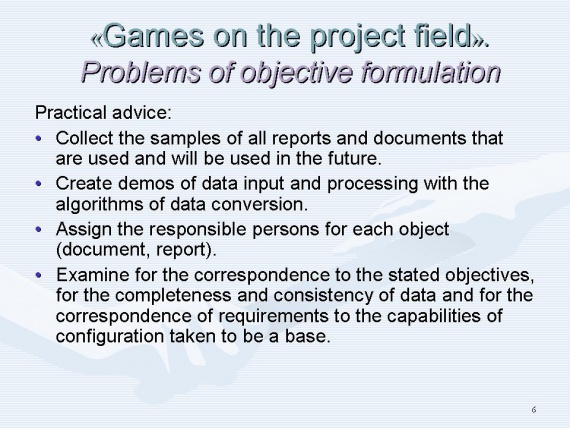 PRACTICAL ADVICE:
It is necessary to request from each project participant those report forms which he either uses in his work or presents for the superior structures or is going to do this. Also, the forms of primary documents are needed that must be included in the system. Both the report forms and document forms must include the decryption of calculation algorithms used in them. In addition, the demos are required with real numbers. And then it is necessary to conduct a series of analyzes with received information: 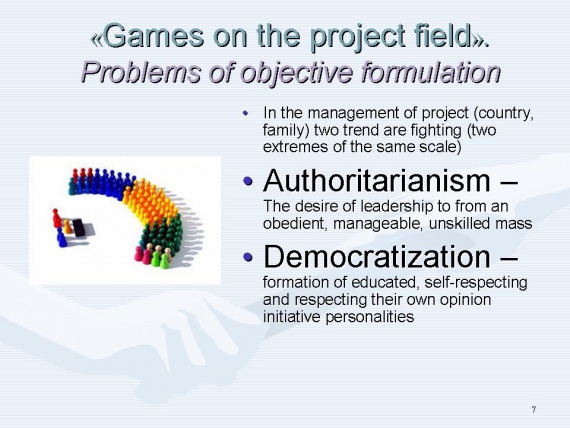 In project management, as well as in the management of enterprise, country or family, always two trends are fighting:

In fact, these are two extremes of the same scale, where on one end there is 100% of authoritarianism and on another — 100% of democracy. By the way, 100% of democracy is a anarchy.
These demands of managers exist, but will never be formalized and written down on the paper. Even an attempt to clarify their position will not give a correct answer. As an America anthropologist Margaret Mead says: «What people say, what they do and what they say that they do — three completely different things ».
Authoritarian management and relationship systems are more widespread. Democratic system is more complicated to construct, but the most important is that it is possible not for each person. To understand that, refer to three internal states of personality that appear during communication. This classification was proposed by the American psychologist Eric Berne who wrote a book: «Games people play» (Eric Berne. Games People Play.1964). 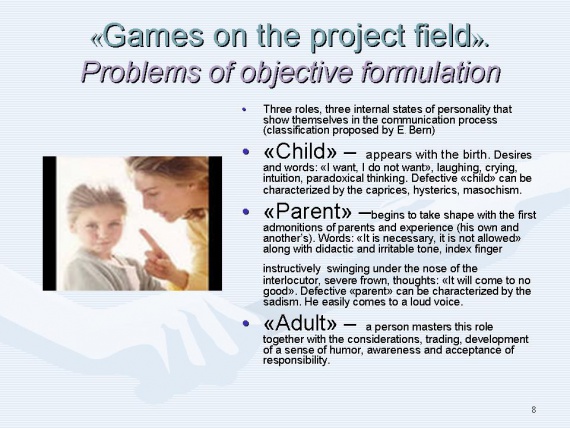 According to E.Berne, all three states of personality take shape during communication, and a person gets them regardless of their wish. The most simple communication process is an exchange in transaction, it occurs according to the similar scheme: «Stimulus» of interlocutor № 1 produces «reaction» of interlocutor № 2 who, in turn, directs «stimulus» to the interlocutor № 1, that is, almost always «stimulus» of one interlocutor becomes a push for «reaction» of another interlocutor. The further development of conversation depends on the current state of personality used in the transactions and their combinations.
Later, these reactions can proceed to the internal dialogue.
Most often people learn two first roles without condescending to the third one. Although, at an early age a kid can demonstrate both the parent state and, more important, adult state. For example, my friends, young parents, have a hectic social life. Their five year old daughter often stays with her grandmother in their own house. One day, returning from a certain event in the late evening, the young parents caught their daughter on the porch.
— Why am I always alone, should I marry or what? — Sad girl said.
But what kind of relationship system can develop in the project? Any project starts with someone’s: «I want». 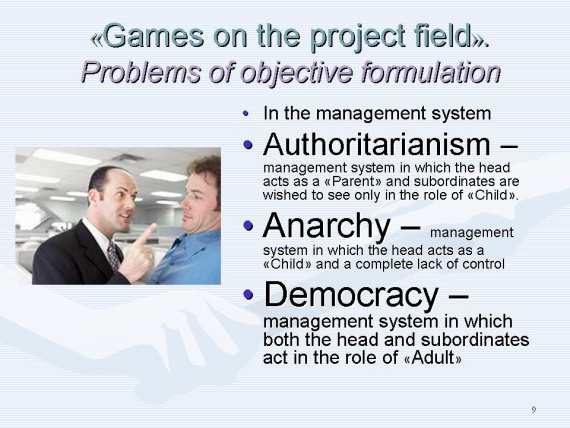 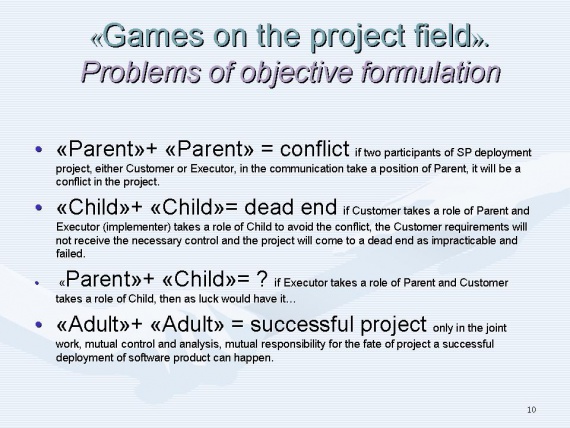 If two project participants during problem discussion will act in the role of «Parent», the conflict is provided.
If one of the participants will take up the role of «Parent» and the second one, to avoid a conflict, will take up the role of «Child», the project may come to a dead end, since the requirements on the project will receive the necessary control.
Only in the joint work, mutual control and analysis, mutual responsibility for the fate of project a successful deployment of software product can happen. And this can only happen when all the project participants will take a part in the generation of the system of checks and balances. 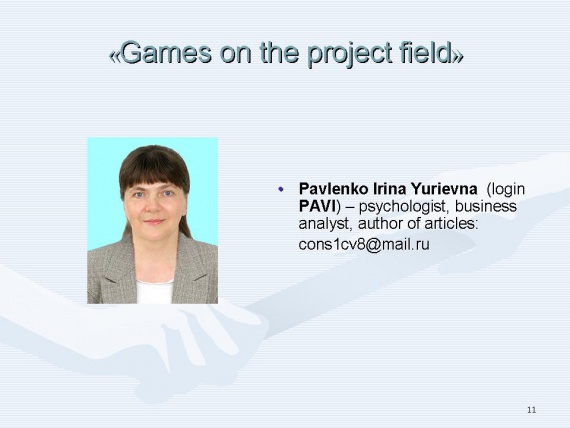