Catalogs are the applied configuration objects. They allow storing in the information base the data that have the same structure and full list of nature. This can be, for example, a list of employees, a list of goods, a list of suppliers and customers.

Each catalog item is characterized by the name and code. The system supports the mode of automatic enumeration of elements in which it can generate by itself a code for a new catalog item. In addition, the system allows controlling the uniqueness of catalog codes denying to create the items with the same codes:

In addition to the code and name, each catalog item usually contains some additional information which describes in detail this item. For example, for a product this can be information about the article, the number of state customs declaration, country of origin, etc. A set of such information is the similar for all the items of particular catalog, and for its storage the catalog attributes are needed: 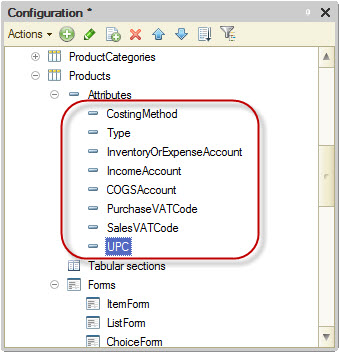 In addition, each catalog item may contain some set of information which is similar by its structure, but different by the number for different catalog items. For example, for each element in catalog Milestones this can be the information about tasks. To store such data, the table parts of catalog are used: 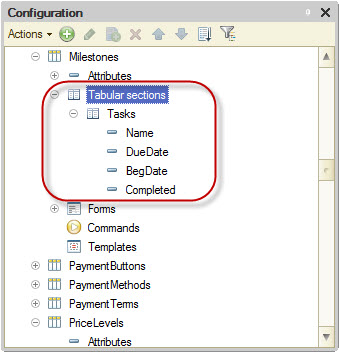 The catalogs can support the hierarchical arrangement of the items. For example, in catalog Products the following groups can be created:Services, Shoes, Food, etc., in which the items are located that belong to these groups. Besides, the catalog groups can include other groups creating the multilevel hierarchical structure. 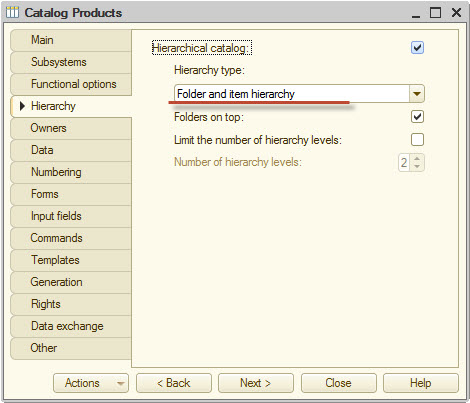 Different catalogs can be in state of submission, i.e. the items of one catalog can be submitted to the items or groups of another catalog. For example, the catalog BankAccounts can be submitted to the catalog Banks. When you prepare the documents for some organization, you can select the bank account not among all the banks existing in the program, but among the banks relevant only in this organization: 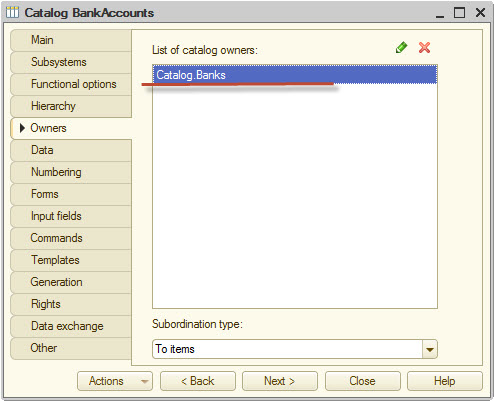 The catalogs accept also creation of predefined items that exist always in the catalog regardless to the user actions. These catalog items are created by the developer when developing application solution and cannot be deleted or moved by the user. For example, if the application solution will be deployed generally in the enterprises of a single country, USA, you can add at once in the catalog Countries the predefined item USA, as it will be needed for most users.

In order to make it possible for the user to view and change data contained in the catalog, the system supports several display forms of catalog. The system can automatically generate the necessary catalog forms. Along with this, the developer has an opportunity to create his own forms which the system will use instead of default forms: 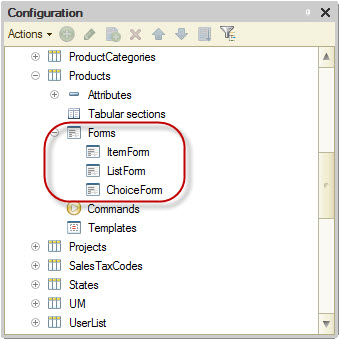 To view data contained in the catalog, a list form is used. It allows navigating over the catalog, adding, marking for deletion and deleting the catalog groups, moving the items and groups. The list form can represent data in hierarchical and non-hierarchical form and allows sorting and selecting the displayed information by several filters: 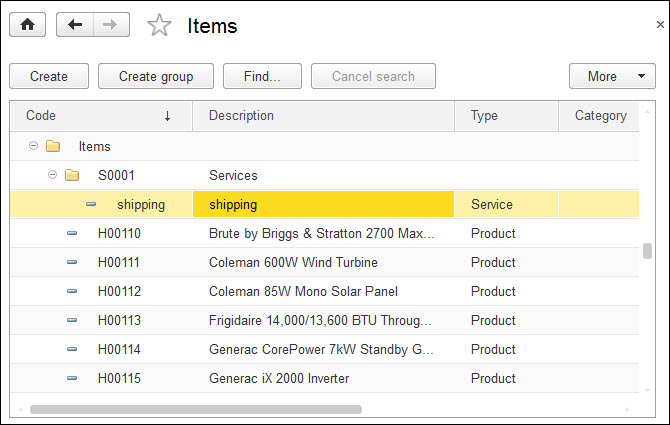 To view and change data of individual catalog items, an item form is used. Usually, it represents data in a human-friendly form:

The system supports a separate type of form for the catalog groups. This is because usually the information content that belongs to the catalog group is much littler that the content of data related to the individual catalog items:

In various user actions in the application solution it is necessary to select the particular catalog items. This may be necessary, for example, when creating the purchase invoice in which the specific goods must be listed. In this case, the system uses the catalog selection form that usually contains a minimal set of information required to select one or another item: 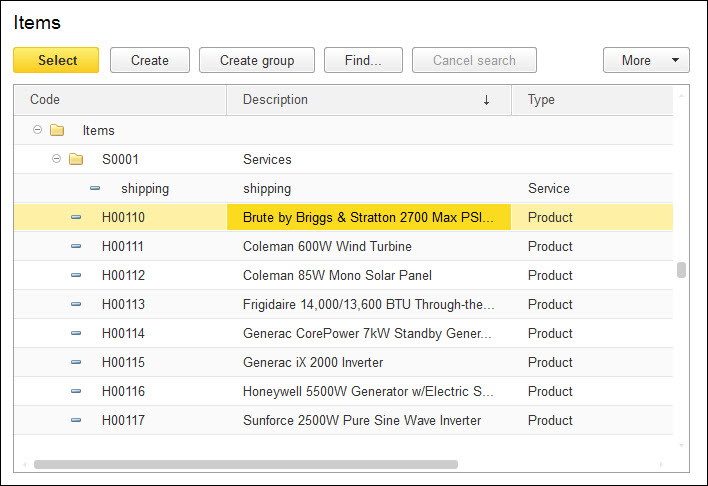 In addition to all the listed forms, the system supports one more form of catalog group selection designed to select only among the groups contained in the catalog.

The catalog can be matched to the multiple templates that contain the data required to ensure the catalog operation: 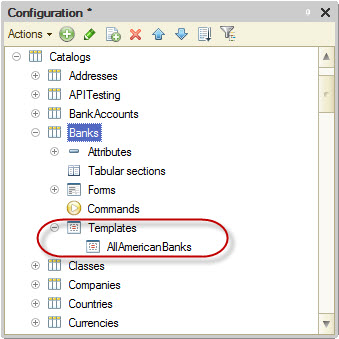 The templates can be used to form the print forms of catalog or to display the additional information related to the catalog.