Exchange plans are the general configuration objects. They are used to implement the data exchange mechanism.

Exchange plan contains information about the nodes that can be involved in the data exchange, determines the composition of data with which the exchange will be performed, and indicates whether the mechanism of distributed information base should be enabled during the exchange.

For each node it is possible to set the code, name and required list of attributes that describe the node. The node may have also several subordinate table parts to store information associated with this node, several forms to display information contained in the exchange plan, etc. For example, the structure of exchange plan ExchangeSmallBusinessAccounting20 can be as follows: 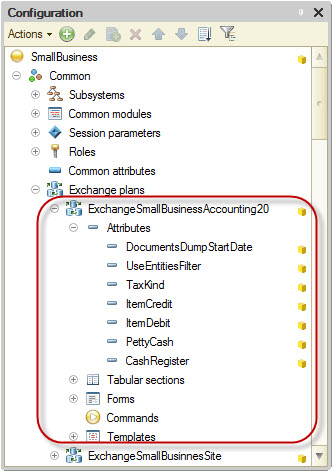 When creating the exchange plan, there is a possibility to indicate whether it will involve the mechanisms of distributed information base or not.

Also in the exchange plan the composition of data with which it is supposed to perform the exchange is indicated: 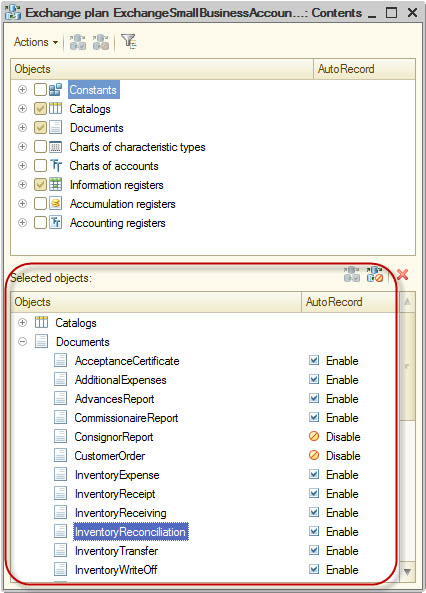 For each application solution object that can be involved in the exchange the mode for registering their changes is set. If auto registration is allowed, the system tracks itself the executed changes and forms a set of data to be exchanged. If the developer denies the auto registration of the changes - he has to perform registration of required changes by himself using the script tools.

Mechanisms implemented by the exchange plan