Sequences are the applied configuration objects. They are intended to ensure the control of the correctness of changes applied by the documents in the accounting data. In addition, the sequences, in case of need, allow restoring the correct map of the changes.

In a few days after that, an error is discovered in the purchase invoice: it turns out that a prime cost of the unit of goods is not 26, but 20 rubles. In the purchase invoice the corresponding changes were applied, and it was conducted over again. As a result, it was found that the data in the accounting system are incorrect, since all the subsequent documents still apply the changes based on the old prime cost of the goods and "do not know" that it was changed:

In order to avoid such situation, these two documents can be merged in a single sequence. Then, in case of changing the purchase invoice, the system will automatically determine that the document sequence is broken and can re-conduct all the subsequent documents that can depend on the results of purchase invoice conduction. In other words, the sales invoice will be checked over again and, when analyzing the remains of goods, the new prime cost (20 rubles) will be received with which the goods will be written-off.

The above example is a fairly simple, however, in the real application solutions the mutual influence of one documents to another can be very complex. Therefore, the system allows creating in a single application solution an arbitrary number of document sequences: 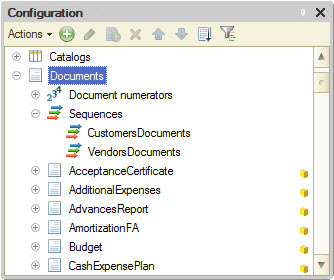 The sequence allows describing the documents which will be related to this sequence, as well as a list of accounting mechanisms of application solution the modification of which must result in re-conduction of the documents of a given sequence: 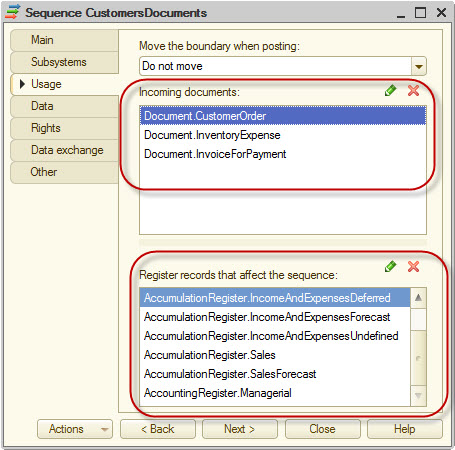 The mechanism of sequences allows more delicate configuring, if it is necessary to make the sequence taking into account not all, but quite certain situations. In this case, it is possible to specify for sequence the measures, and only those documents will be re-conducted that applied the changes in the accounting mechanisms according to the values of measures. 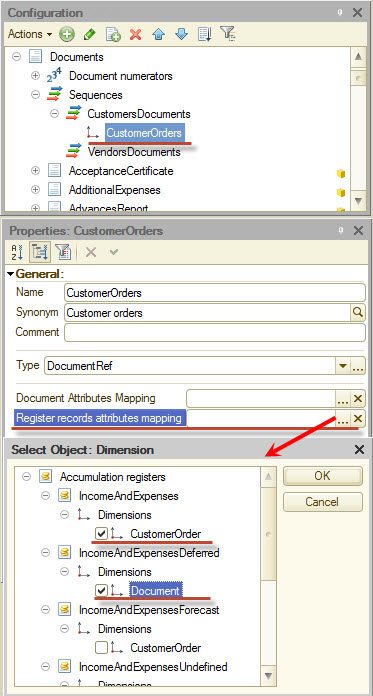